The loony Left finally got their wish.

And Tucker Carlson just got suspended for one reason that you won’t believe.

Social media companies are now censoring the truth by calling it “hate speech.”

Tucker Carlson and other conservatives learned this lesson the hard way.

Twitter locked the account of the satirical Christian site, Babylon Bee, over a tweet where the Bee mocked transgender Biden administration official Rachel Levin by giving him its man of the year award.

Twitter also locked the account of Turning Point USA founder Charlie Kirk for speaking the truth that Levine is really a man.

“Richard Levine spent 54 years of his life as a man,” Kirk wrote in the “offending” tweet. “He had a wife and a family. He ‘transitioned’ to being a woman in 2011. Joe Biden appointed Levine to be a 4-Star Admiral and now USA Today has named ‘Rachel’ Levine as a ‘Woman of the Year.’ Where are the feminists?”

Tucker Carlson posted a screenshot of Kirk and the Babylon Bee’s tweets and wrote, “But wait. Both of these tweets are true.” 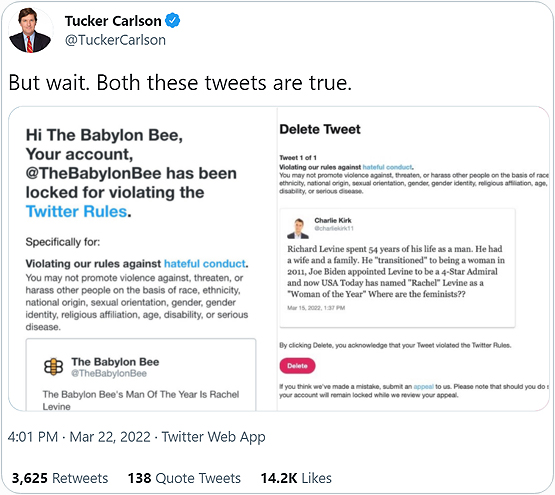 Carlson, the Babylon Bee, and Charlie Kirk refuse to delete their tweets because that would be an admission that they were wrong and that a guy born Richard Levine is really a woman named Rachel Levine.

Social media companies want to completely censor the American conversation by forcing users to say what they know to be false.

It’s like in 1984 when O’Brien tortures Winston Smith by gleefully showing how the Party can get anyone to admit that 2+2=5 as the greatest form of control.

Polls show Democrats are on track to lose control of the House of Representatives and the Senate in November.

That’s why Twitter is meddling in the election and suspending as many prominent conservatives as they can.

Social media companies got away with rigging the 2020 election by censoring true stories about the Biden family’s corruption.

Now Twitter is reaching back into that playbook to censor conservatives ahead of the Midterms.